Fort Erie Meteors forward and leading scorer Marco Lariccia was all set to join the Toronto Jr. Canadiens of the Ontario Junior Hockey League this season until the real world came knocking.

Lariccia was offered an apprenticeship at a local garage in Fort Erie and decided to stay with the Meteors for his final season of junior hockey so he could begin his work life.

Once Lariccia was back in the fold, Fort Erie head coach and general manager Nik Passero wasted little time naming the 20-year-old Port Colborne native captain for the upcoming season. 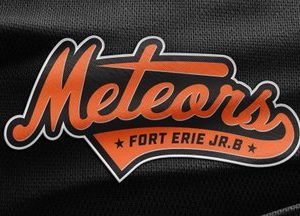 Lariccia, who finished up last season with the C after Cail Cirillo was dealt to the St. Catharines Falcons at the trade deadline, feels that experience will be an advantage this time around.

“I think it helps, definitely,” he said. “You know what you’re going into and the different responsibilities.”

Lariccia tried to keep things as simple as possible last season after taking over the captaincy.

“We were getting ready for the playoffs and bringing guys in and getting everyone together before we went and tried to go on a run,” he said.

Lariccia feels it is important the four leaders step up, particularly under the current circumstances and the uncertainty and stress surrounding the COVID-19 pandemic.

“(There are) a couple of things we want to do to change things up a bit, that’s not just me, but the A’s as well,” he said. “It (leadership) is huge, especially for the young guys. You don’t know what’s going to happen so it’s about being comfortable with everything going on.”

“On a young team like ours where we don’t have as many big skilled players, the biggest thing is if we’re not all playing together and getting along and have confidence going into games, we don’t stand a chance.”

Nik Passero is confident in his leadership group — he considered naming Lariccia and Drew Passero as co-captains but kept the status quo at Drew Passero’s request.

“Anthony keeps the room light but he’s a hockey kid and knows the game and I think he knows his time and place. I’ve seen that leadership,” Nik Passero said. “Tyler is a young kid who comes to work every day. He’s more of a do as I do type of leader. He’s going to be fun this year. He had a good year last year learning the ropes and he’s going to be a defencemen who will step up and who we need for sure.”

Nik Passero is comfortable giving his leaders a good share of responsibility.

“The communication between the captaincy and our staff is huge. At this age and with this kind of team we have to rely on them. It only makes them better and makes them feel more involved, not just on, but off the ice as well. It’s important to involve them. They are in the room. They know. They have a pulse on it and if they don’t, then they’re not the right leaders.

“You can’t make every single person happy so it’s up to the captains to put the small fires out and start some fires under guys is important too. The coaches can’t do it every time. It has to come from within.”

The Meteors, who continue to skate twice weekly in anticipation of a Dec. 2 start date, have made a couple of moves recently adding 19-year-old defenceman Joshua McVeigh, who split last season between Welland and Hamilton, and 18-year-old rearguard Caleb Booth, who played junior C in Stayner last season.