Daylon Groulx is following in his father’s footsteps.

The 20-year-old Fort Erie native has signed a two-year deal with the Klagenfurter AC Red Jackets of the Austrian Hockey League.

“Obviously my dad used to play in Austria and got his citizenship when he was there. It made it not easy, but easier, for me to make that transition,” he said.

Daylon Groulx had a solid OHL career of his own, playing three full seasons with the Owen Sound Attack and Ottawa 67’s. He was slated to return to the OHL for his over-age season, but the COVID-19 pandemic put a crimp in those plans.

“I figured with this opportunity I couldn’t really say no to it,” he said. 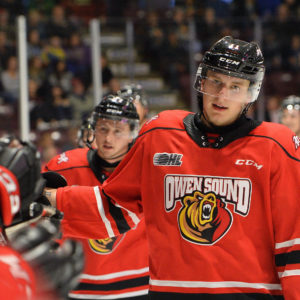 Daylon Groulx plans to leave for Austria as soon as the paperwork can be completed.

“Ever since I was younger, it was something that interested me to go over there and play. My dad played there (Klagenfurt) and he knows about it and he’s going to be coming over with me for a few weeks,” Daylon Groulx said.

He will be assigned to the team’s top farm team to help him acclimatize to the European style of play.

“Daylon Groulx is a physically well developed, toxic player who has received solid all-round training,” Red Jackets general manager Oliver Pilloni said on the team’s official web site. “He gives our squad more depth, although we will have to give him a period to get used to because he is switching from junior to senior ice hockey as well as from the small North American to the large European ice rink.

“We see him as a medium to long-term investment and are pleased that he has decided on the EC-KAC.”

Daylon Groulx is confident his skill set will translate to the bigger ice in Europe.

“It’s going to be different, obviously,” he said. “They have the big ice and the players are older and more skilled so I just have to continue to keep working.

“I’m there for a reason and they like what I’m doing. If I just play my game like I can, I think I can be successful.”

“I still remember going to my first Owen Sound training camp when I was 16,” he remembered. “When I was playing in Fort Erie, the older guys would look at me and tell me to enjoy it because the five years flies by. I kind of shrugged them off. Looking back now, it was the best four years of my life playing junior and it definitely flies by quicker than you think.”

Daylon Groulx began his junior career with the Meteors as a 16-year-old before making the jump to the OHL.

He has fond memories of his time in the orange and black.

“It was a great opportunity. Ever since I was younger when my dad coached, I always looked forward to going to the games and then when I played for them it was pretty special,” he said. “My family is very close with the Passero family and they had so much to do the my success. They gave me an opportunity and played me a lot of minutes and a lot of important minutes.

Like all small businesses dealing with the COVID-19 pandemic, BPSN is not sure what the business landscape will look like when things return to normal. Our website is financed primarily through advertising revenues and partnership agreements with many local sports and educational organizations in Niagara. Our goal is to continue providing our readers with the extensive local sports coverage you have come to expect from our site. Since our inception, we have written more than 2,900 stories on our local athletes and teams. Many of our readers have given us one-time donations or send us monthly contributions to help offset our costs. We would be eternally grateful if others would consider doing the same by using the Support Us button located on the right-hand side of our home page below the mosaic.