A familiar name will be behind the bench for the Fort Erie Meteors when hockey returns.

Nik Passero, the 27-year-old son of the late Tony Passero, is taking over as head coach and general manager of the Meteors for the upcoming season.

Tony Passero, owner and director of hockey operations for the Meteors, died in 2019. For more than 40 years, Passero served the Meteors in some capacity, including coach and general manager.

“It was always a consideration,” Nik Passero said. “I think no matter what you do, our name is attached to this.” 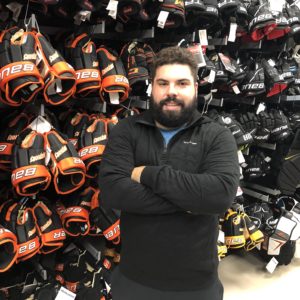 Nik Passero played four years at Westfield State and then coached two years at Franklin Pierce University in New Hampshire and was hoping to return for a third before the COVID-19 pandemic hit.

“I never thought I would be home so soon. I loved being in the States and coaching over there but things changed. Life threw us a curveball,” he said.

“Me and Anthony and my sister (Meaghan) are as close as can be. We’re on the phone everyday talking. My sister is calling me about players. Mom (Cheryl) sits on the outside and watches and makes sure we don’t do anything stupid or burn any bridges.”

Veteran junior B coach Rob Hubbert coached the Meteors for part of last season before giving way to Dave Marrone, Chris Risi and Steve Dol, who turned the fortunes of the team around.

Nik Passero was appreciative of the job the trio did.

“I can’t thank Dave, Chris, Steve and (trainer) Armando (Caputo) enough,” Nik Passero said. “They are still helping and involved. Dave has a lot going on and it was little too much for him full time. He never pulled the plug or anything, I knew I was going to be home and if I want to do anything in hockey, I might as well take it and run with it.

“With their help and tutelage — I work with them and talk to them everyday — I just think I’m ready to take the next step.”

Nik Passero also felt it was his obligation to continue the family tradition.

“Pride is definitely something that bought into this,” he said. “I’m on phone every day trying to figure it out. I left it to other people last year and now it’s a sense of pride to go and do it myself.

Nik chuckled when asked how he thought his late father would be dealing with COVID.

“I picture what he would have done during this pandemic,” he smiled. “Every year was exactly the same. Run your rookie camp, run your training camp and call same scouts and advisors every year.  I have called people that played for my dad I hadn’t talked to in 10 years or people that didn’t like my dad that I had to build bridges with.

“He never used the computer. Imagine telling my dad you can have guys on the ice but no contact. What kind of conversation would that have been? I talk to mom about that all the time.”

Nik Passero said he almost took over as head coach following his sophomore season playing, but had a change of heart at the last minute.

“I told my dad I was done playing and going to come home and coach,” he said. “I had already hired my assistant coaches and I took three months off of skating and training but I wasn’t done. I had to go back. If I would have done that, looking back, it would have been a disaster. Those two years were important to me learning about people. It was huge for me.”

Nik Passero, who graduated with a bachelor of business administration and a masters degree in sports management, loved his experience at the collegiate level.

“I think if I didn’t coach over there I wouldn’t be able to do it,” he said. “Learning what I did over there under the head coach, I learned more about people and administrative stuff I never would have learned.”

Nik Passero is currently working as the store manager at Front Row Sports in Fort Erie. His long-term goal is to return to the collegiate game as a head coach.

The Meteors will being skating once a week after Labour Day and then hit the ice for training camp in October. The Greater Ontario Junior Hockey League has a tentative start date of Dec. 2. The GOJHL will still have to work with the provincial government and the Ontario Hockey Association to be granted approval.

Like all small businesses dealing with the COVID-19 pandemic, BPSN is not sure what the business landscape will look like when things return to normal. Our website is financed primarily through advertising revenues and partnership agreements with many local sports and educational organizations in Niagara. Our goal is to continue providing our readers with the extensive local sports coverage you have come to expect from our site. Since our inception, we have written more than 2,800 stories on our local athletes and teams. Many of our readers have given us one-time donations or send us monthly contributions to help offset our costs. We would be eternally grateful if others would consider doing the same by using the Support Us button located on the right-hand side of our home page below the mosaic.