The Fort Erie Meteors are doing their best to make a difference in the community.

The junior B hockey team recently collected toys and canned goods to be distributed to the needy in the area.

For the second year in a row, Meteors director of community relations Meaghan Passero gave the players the task of spending $25 to buy a gift and asked them to make sure there were a proper mix of presents for both boys and girls.

“We explained to them that there are a lot of families that need help around this time of year, especially because of COVID.  They went shopping and came back to the arena and after practice we wrapped the gifts,” Passero said. “They had a lot of fun and they took the opportunity to fool around, of course.”

Passero said she even had to teach some of them how to wrap gifts, which was all part of the process of involving the players as much as possible. 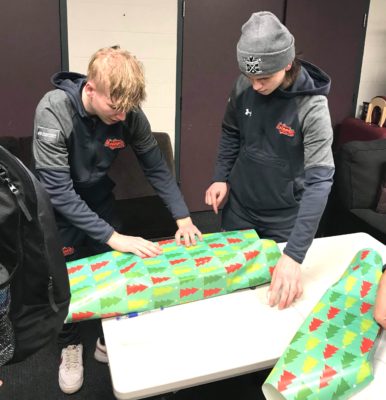 “Some of them were even having a crazy time using scissors,” she laughed. “It was fun. They made jokes and it was a good team bonding thing as well.”

The gifts were given to the Niagara Area Children’s Assistance Program (NACAP).

“As small as having something under the tree, you’re not only making their Christmas, you’re making their year,” she said. “It’s huge. They’re pretty amazed that’s there’s such poverty out there and that people need so much help.”

“A lot of them, because they’re big-city boys, they don’t know what COPE is,” she said. “It’s a big thing for Fort Erie. It feeds a lot of people. It’s pretty amazing how many families need that help.

“They fill a lot of cupboards and we try and out as much as we can.”

As well, the team wrote out Christmas cards which were sent to the nursing homes for people who won’t be able to see their families because of COVID or don’t have family around.

“We want just to put some smiles on people’s faces at this time of year,” Passero said. “Who knows what’s going to come up with this new variant of COVID? It’s taking away from everybody again and we just want to lift everybody’s spirits, but we also want to teach these boys that there’s a lot of people that suffer and need help and the true meaning of Christmas.” 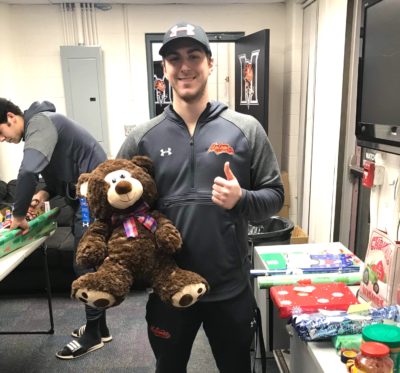 Passero said she and her brothers, Meteors head coach and general manager Nik Passero and assistant coach Anthony Passero, met with the team to drive home the point of how fortunate they are to be able to play hockey at an advanced level.

“Nik and Anthony and I explained that to the boys. (We told them) you have it made. You get to play hockey and it’s not cheap and there are kids that don’t even get that,” Meaghan Passero said.

The Passero’s are already planning for next year.

“We want to make it bigger,” she said. “We want to start earlier and have people donate toys and canned goods through the month of December and try to make it a lot bigger than it has been.”