The Fort Erie Meteors wasted little time getting back to work.

The Meteors hit the ice at the Leisureplex Monday, the first day they were able to practice after the Niagara Region was moved into a red zone.

“It’s great,” Meteors defenceman Jayden Baldinelli said outside a noisy Fort Erie dressing room. “We’re all ready to go. This is great for us. Everyone is happy. It’s good to be playing.”

The Meteors were last together Dec. 18 for a game before the Niagara Region was locked down due to the COVID-19 pandemic.

“We all kept a good, positive mindset and just tried to stay positive. We reached out to each other and tried to stay in contact,” said Baldinelli, an 18-year-old Niagara Falls native. 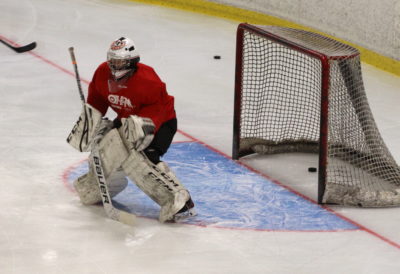 Meteors coach Nik Passero said his phone blew up last week seconds after the announcement was made the region was being moved into red.

“I found out and guys were texting me in minutes,” Passero said. “I got a text almost immediately. We were ready for it. The town of Fort Erie has been helping me through this whole thing.”

The Meteors plan to run five practices a week with the team split into 10 players and one coach on the ice at a time as per health guidelines.

“We’ll work on skills and get their legs back until we hopefully go to orange and then we will start playing games versus Thorold,” Passero said.

Passero said he never gave up hope the team would at the very least get back on the ice for practice.

“I just wanted to be here,” he said. I always thought, if we can get into orange, then we can play games,” he said.

Passero feels the layoff has been so long it is almost like starting over. The Meteors had played 20 exhibition scrimmages versus Niagara Falls and Pelham before the lockdown. 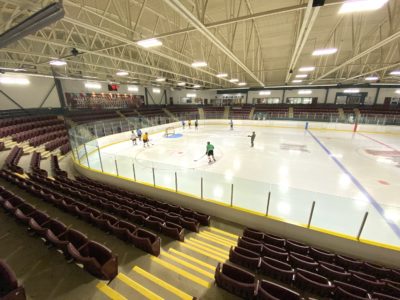 “It’s forgotten now. We were doing well and enjoying ourselves. It was restricted but we were still here everyday and now it’s on the back burner,” he said. “We’re starting over.”

Passero feels it is important for the players to have some sense of normalcy in their lives, even if they don’t end up playing again.

“We’ll keep trucking along like we have been,” he said. “Now this isn’t about money or developing kids, it’s about health. These kids need to be out there. They’re happy in there. That’s what it’s about at this point.”

Passero is still holding out hope some type of schedule can be played. The Greater Ontario Junior Hockey League hasn’t released a statement on future plans since scrimmages and practices were cancelled across the league just before Christmas.

“It will be a domino effect when a league says they are shutting down but no league (in Ontario) has said that,” Passero said. “No one wants to be the first one.

“As long as we play something. I have no expectations at this point — 12-10-18 games — but I’d definitely like to get into some games.”

Dear reader. If you liked this story or one of the 3,200 other stories found on our website, please consider hitting the Support Us button on the right-hand side of our home page and making a PayPal contribution to our website. Your support would be much appreciated.