The Fort Erie Meteors are taking tangible steps to become involved in the community.

Meteors director of community relations Meaghan Passero has come up with a variety of ways for the organization to connect with the community of Fort Erie during the holiday season.

“Last week I gave them the task of going out and buying a Christmas gift,” Passero said.

Passero split the team in half. Players were paired up and given the job of purchasing a gift for either a male or a female.

“There is a program in Niagara if families are unable to provide as much as they would like to for Christmas, there is help,” Passero said. “My brothers (Meteors coaches Nik Passero and Anthony Passero) and I wanted these boys to learn that there are people in need and it’s nice to help out, especially around this time.”

“The boys wrapped their gifts and had fun doing it. It was really awesome,” she said. “We’re lucky. We have a young team so they still have that awesome Christmas spirit. They understand being kids and opening gifts under the tree because Santa came. They can’t imagine if Santa didn’t come.

“They were excited and pumped.” 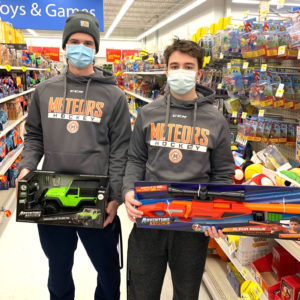 The players also went out shopping and collected canned goods for a community food drive.

“There are a lot of elderly who can’t see their families or don’t have family,” she said. “These are young, active boys who have amazing personalities so we want them to get involved as much they can.”

Things went so well Meagan Passero said the players have asked about doing even more.

“They were excited to be out in the community. As soon this COVID thing simmers down we will be able to get out and do a lot more,” she said.

Megahan Passero feels it is vital the team become involved in the community. 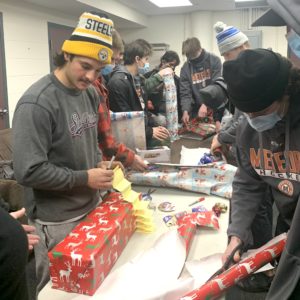 “It’s huge,” she said. “My dad (former Meteors owner, the late Tony Passero) tried to do a lot but he was just one person. Now that it’s Nik, Anthony and I, we’re younger, we know how to branch out and make these things go,” she said. “We want to get these boys going into the schools and let people know who they are so they know they have support. It’s really important to show these players they have support in our small community.”

Meaghan Passero loves being involved with the team after growing up around the rink.

“Nik and Anthony are busy with doing all the on-ice things, which they have done an absolutely amazing job of, and I’m so proud of them,” she said. “I want to be part of that too so I try to get the boys outside of the rink and they get them involved.”

Meaghan feels her father would be pleased with the job they are doing. Tony passed away in April 2019.

“We didn’t have much notice he was leaving us with this wonderful hockey team being the way he exited,” she said. “I think my dad would be so proud of all of us because it brings us closer, even though we were all very close.

“I know my dad would be over the moon how much the boys have stepped up and taken over the team and made sure all business aspects were taken care of. I think he would be ecstatic.”