The Fort Erie Meteors recently took a break from filling the net to fill the shelves at Community Outreach Program Erie (COPE).

The Meteors held a game earlier this month where fans who attended were admitted free of charge in exchange for a canned good. The game was sponsored by BB’s Regional Roofing & Siding, DiFrancesco Construction, Schulz Inc. Building Division and BVK Plumbing.

“The amount of bags people brought in — I was thinking some people were going to just bring one can —but it was bags upon bags of food that was coming through the door.

“I’ve never seen so many. It was great.” 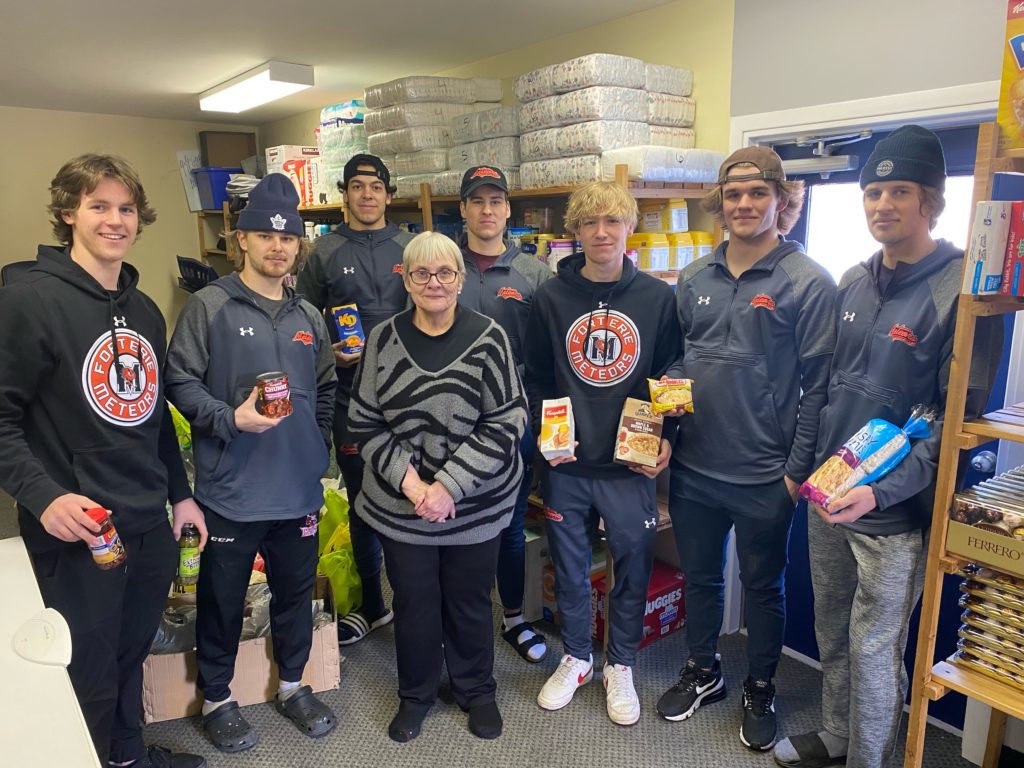 Passero then loaded up a truck and brought the goods to COPE.

“I brought six players with me to see what it was all about and learn and stress to the boys that all these cupboards are being filled because of you guys,” she said. “People are coming to watch you and look at these cupboards.

“People in Fort Erie have food now because of you guys.”

Passero said COPE manager Barb Volzke was over the moon with gratitude.

“She had tears in her eyes,” Passero said. “She’s going on 40 years with COPE and she even said to the boys how amazing it was. She just kept thanking them and telling them you don’t know how many mouths you are going to feed.

Passero said it was important to the organization to show the players people are in need everywhere.

“This is a small town and every city has a food bank and people need help,” she said. “You might not think that person you go to school with needs help but they absolutely do.

“This is a learning lesson for these guys. It’s not only helping people but it’s important to know life isn’t easy.”

Players were also required to chip in and bring canned goods to the game.

“We’re proud of the boys for doing this and extremely grateful to the community to realize that we’re there to help too. We’re all in this together and that’s the big thing,” Passero said. “We’re part of Fort Erie. People have lost jobs and not even because of COVID.

“It’s really nice that people believed in us that we’re going to get the job done.”

Passero said the idea for a food drive came from her brother, Meteors head coach Nik Passero. The organization has a long history with COPE, dating back to the late Tony Passero.

“My dad started this a long time ago,” Meaghan Passero said. “He tried to do a lot of things for COPE so we built off him. The three of us learned from our dad. He’s the one that laid down the foundation and now we have to build off it.”