After last year’s post-season was cancelled due to the COVID pandemic, this year’s playoffs get underway this week about a month later than usual, once again due to the pandemic which shut down play for three weeks in January and pushed the post-season back accordingly.

Three of the best-of-seven quarter-finals begin Wednesday as the Niagara Falls Canucks visit the Hamilton Kilty B’s, the Thorold Blackhawks travel to Caledonia to square off versus the Corvairs while the Welland Junior Canadians invade the Leisureplex to play the Fort Erie Meteors. The Pelham Panthers and St. Catharines Falcons begin their set Thursday in Pelham.

So, without further ado, here is a look at each series followed by a fearless prognostication.

The Canucks finished in last place with a 7-37-3-1 record after the forfeiture of 13 victories and three overtime losses in games from Sept. 24  through Dec. 3 when the organization did not meet the requirements of the GOJHL vaccination policy. The Canucks appealed the ruling and originally had it overturned but that decision was apparently subsequently reversed since the points were never returned. No official announcement regarding the situation was released by either the GOJHL or the Ontario Hockey Association.

Regardless, the Canucks are in tough versus the Kilty B’s who had the best overall winning percentage in the GOJHL at .844.

Hamilton is a complete club. They fashioned the best goal differential (+117), are among the most disciplined and have a solid lineup from top to bottom with nine players hitting double digits in goals. 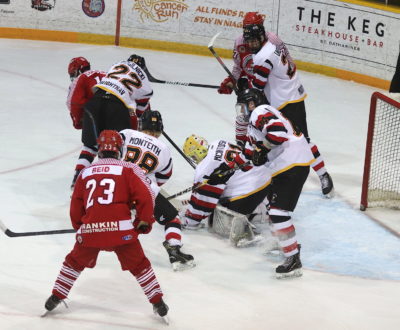 Braedyn McIntosh (1.62 goals-against average) and Gage Stewart (2.29) are a formidable tandem in goal.

The Canucks are led up front by centre Matthew Riva, who placed fourth overall in GOJHL scoring with 33 goals and 69 points. Riva recently committed to Brock University.

Owen Goodbrand (17) and Zach Mambella (11) were the only other Canucks to hit double digits in goals as the Canucks were credited with just 69 goals in 48 games.

BPSN predicts: The Kilty B’s in 5.

St. Catharines put together an outstanding regular season with 36 wins and the second-best (.771) winning percentage in the GOJHL.

The Falcons are built from the net out, led by former Niagara IceDogs backstop Andrew MacLean, who posted an eye-popping 1.45 goals-against average, .943 save percentage and set a league record with 10 shutouts. Back up Josh Johnson showed he can play as well with a 2.11 GAA in 14 games.

The Falcons led the league in goals against with just 78 permitted in 48 games.

Up front, Nicholas Rubino, picked up from the Thorold Blackhawks at the trade deadline, led the team in scoring with 61 points, Blake Yetman collected 44 points in only 28 games while rookie Chris Reid, Sam Williamson, Logan O’Flanagan and Kyle Glenney provide depth.

Look for rookie call-ups Noah Reinhart and Luca Testa to give the offence a boost.

The Panthers struggled with an inordinate amount of injuries and suffered through an extended losing streak before beating the Falcons, who sat many of their veterans, in the final game of the season.

The Panthers are led up front by Florian Xhekaj, Jonah Devereaux and Jack Merkosky while Luca Marandola and Cody Miskolczi also hit double digits in goal.

Veteran Brayden Kelso is a solid goalkeeper who saw a lot of rubber this season.

BPSN predicts: The Falcons in 4.

The Corvairs had a solid enough season with 31 victories but aren’t quite up to the standard set by previous Caledonia teams.

Ethan Langevin is a top-notch goaltender as evidenced by his 2.62 goals-against average and .919 save percentage. 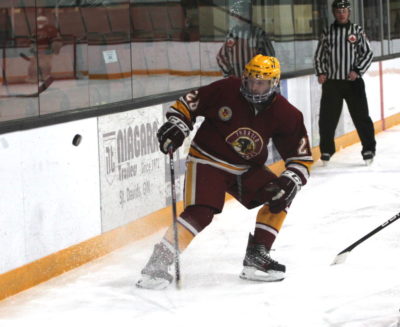 The Blackhawks were a team in flux for most of the season with an ever-changing roster and several key injuries.

The Hawks played some of their best hockey down the stretch as they found their identity as a hard-working, defence-first team.

Nathan Kelly, who led the Hawks in scoring but missed the last few games of the season, will be good to go as is talented forward Wyatt Gibson, who is returning from a wrist injury. Sam Tonelli (15-16-31) had a solid rookie campaign while Adrian Diodati came on late to finish with 12 goals.

Veteran Noah Fortuna (3.17 GAA) and .909 save percentage will need to be at his best to give the Hawks a chance.

BPSN predicts: The Corvairs in 5.

The fourth series looks to be the most competitive and interesting.

The Meteors had very respectable season, finishing in fourth place with 26 wins and 53 points, while the Junior Canadians struggled out of the gate but came on as the season progressed under coaches Dave Burkholder and Zenon Konopka.

The Meteors won the first four matchups of the season before the Junior Canadians responded with three straight victories over Fort Erie in their final three encounters.

The Mets lost rookie Antonino Pugliese to the Kitchener Rangers and struggled to replace his offence until Brayden Krawczyk was brought in after Christmas. The Buffalo native netted 27 points in 22 games. 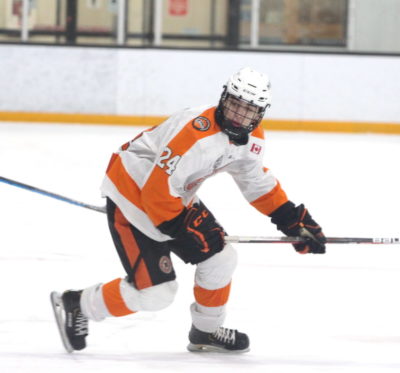 Goalies Duncan-Nichols Delay (2.50 GAA) and Josh Smith (3.31 GAA) gave the Meteors a chance to win most nights with their play.