Nothing ventured, nothing gained.

Jayden Baldinelli has no regrets after trying his hand in the Ontario Junior Hockey League with the Cobourg Cougars.

The 19-year-old Niagara Falls native played 14 games with the Cougars this season, compiling two goals and six assists, but wasn’t seeing the ice time he desired so he returned to the Fort Erie Meteors recently where is expected to play a more prominent role.

“Looking back at it I honestly think it was good for me to be up there,” Baldinelli said. “It was good experience. It was good to be around a lot of different guys from all over and kind of see what it’s like at a higher level.

“My end goal after junior hockey is definitely trying to play college hockey and I thought that was going be a good step for me and for my future, so I figured why not?” 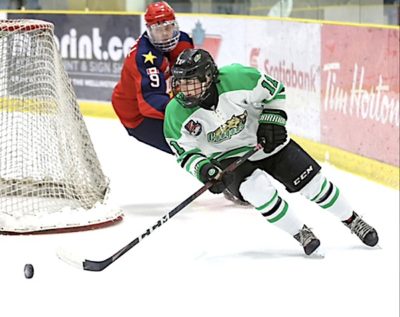 Baldinelli, who said he enjoyed the experience in Cobourg away from the rink, was coached by Niagara Falls native and former Erie Otters assistant coach Wes Wolfe.

“I think I just wasn’t exactly in the right spot for where I wanted to be myself,” Baldinelli said. “I think coming back to Fort Erie I’ll be given a lot of opportunities to able to prove myself.”

Baldinelli has made an immediate impact upon his return to the Meteors with two goals and six points in his three games back.

“We were excited at the opportunity to bring Jayden back and he had a great first weekend with us,” Meteors coach/general manager Nik Passero said. “He brings a lot of leadership and of course his speed and talent.”

Passero said Baldinelli also brings the intangibles he is looking for.

“You would be hard pressed to find a better person in this league, and we couldn’t give up the chance to bring that kind of character in our locker room,” he said.

Baldinelli played his first two seasons of junior with the Meteors and had a comfort level with the team and Passero.

“I think coming back, knowing Fort Erie had my rights, Passero has always been very high on me and was able to welcome me back with open arms,” Baldinelli said. “It was definitely my first spot to look at.”

Baldinelli figures the Meteors, who are a respectable 8-9-1, have a chance to make some noise this season.

“For sure, I think this a Fort Erie team that’s going to be dangerous this year,” he said. “We got a lot of guys that look really good together and it’s going to be something special I think once we start getting going here.”

Baldinelli has been on a line with Joseph Macchione and Antonino Pugliese and the trio has clicked immediately.

“They are a couple of younger guys on the team on the team but it’s good. They like to play with me and I like playing with them so we’ll have some fun,” Baldinelli said.

Baldinelli is also comfortable taking on more of a leadership role now that he is back in black and orange.

“I think Nik, as well as the rest of the management, has been looking towards me to take some of the younger guys and show them what it’s like being in this program for almost three years now,” he said. “They’re looking guys to show them what Fort Erie is all about.”

Baldinelli, who attended high school at St. Joseph’s Collegiate in Buffalo, is taking some on-line courses as he keeps his options open going forward.

The Meteors are home to the league-leading Hamilton Kilty B’s Saturday.