Rylan Masterson isn’t going to let the disappointment of being passed over in the recent Ontario Hockey League draft deter him from his goal.

The grandson of former Niagara Falls Canucks owner and coach Terry Masterson will suit up for the Fort Erie Meteors next season to help keep his dream alive of playing at the highest level possible.

“It was just an obvious choice for me,” the 15-year-old, Grade 10 student at A.N. Myer said. “The Passeros have always been good to my family. Fort Erie is nice and close so I figured I’d go there.”

Masterson had already committed to the Meteors before the draft. 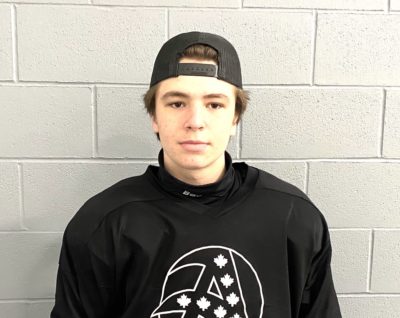 “I just figured I wasn’t going to play (in the OHL) at 16 anyway so it would always have been good to have that spot to go to,” he said. “It would have been nice to play for the Canucks — my whole family did — but we really don’t talk too much about that.”

Masterson plans to use the OHL snub as motivation.

“It was disappointing but I just have to keep my head up and keep my head going,” he said. “When I go play junior B I’ll show that I can play and I should have been drafted.”

“He would have been on my team last year,” Passero said. “He’s a great kid who wants to get better and really has goals in hockey.

“Not getting drafted hurts now but I told him there are just more people to prove wrong. As cliched as it is, it’s time to get to work. I think he has the hockey family that knows the hockey journey doesn’t start or end with the OHL draft.”

Passero sees Masterson, who was captain of the Southern Tier Admirals U15 AAA squad, as a good fit with the Mets.

“We couldn’t be more happy to bring him in. He has good talent. He’s raw, but I think he’s going to succeed with us and our D core. We have five returning D so they’ll be able to help him. We’re a young D, but we have experience, which is nice.

“I think he’s going to fit in perfectly with us.”

Passero likens Masterson to defenceman Derek Smyth, a St. Catharines native who suited up for the Meteors last season in their non-contact scrimmages after being selected by the Ottawa 67’s in the 11th round of the 2020 OHL draft.

“We didn’t bring him in to play big minutes but he was running our power play two weeks into the season and he’s got looks from quite a few top schools and Ottawa is very interested in him too,” Passero said. “We’ll bring Rylan along slowly and watch him succeed.”

Passero was thrilled to bring in a Masterson.

“Terry didn’t miss many practices last year,” Passero said. “When my dad passed away, Terry’s name was thrown around to help coach. It didn’t work out but Terry has been very good to my family and we’re happy to have a Masterson wear the black and orange for sure.”

The Meteors plan to begin outdoor workouts next week.

Dear reader. If you liked this story or one of the 3,300 other stories found on our website, please consider hitting the Support Us button on the right-hand side of our home page and making a PayPal contribution to our website. Your support would be much appreciated. If you are a business owner, please consider advertising on our site. Our rates are reasonable and we provide plenty of exposure for your business. Contact bpotrecz@outlook.com for more information.